Home | Posts | MORTGAGE LOANS ON A RAPID RISE FOR 8 STRAIGHT SEMESTERS: THE ROMANIAN RESIDENTIAL MARKET IS WITNESSING ITS BEST PERIOD IN HISTORY

MORTGAGE LOANS ON A RAPID RISE FOR 8 STRAIGHT SEMESTERS: THE ROMANIAN RESIDENTIAL MARKET IS WITNESSING ITS BEST PERIOD IN HISTORY

From an economic standpoint, Romania is currently witnessing one of the best periods in recent history: the Gross Domestic Product (GDP) has entered the eighth consecutive year of growth, the number of employees and wages are rising from one month to another, with the biggest threat to the new investment projects being the labor shortage.

Macroeconomic data has restored optimism in the residential market, corroborated with bank interest rates, also at historic lows in recent years, fueling the demand for mortgage loans: in each of the last eight semesters (between H2 2014 and H1 2018), the mortgage loan balance increased by at least 2.8 billion lei (the equivalent of 600 million euros), almost reaching the 70 billion lei threshold (15 billion euros) at the end of H1 2018.

At the end of 2008, the mortgage loan balance was of circa 21 billion lei (EUR 5.7 billion), more than three times lower than the current one, according to data from the National Bank of Romania (BNR). During the last decade, the financing of real estate acquisitions was especially boosted by the ”Prima Casa” program. Through this program, approximately 245,000 mortgages have been granted over the past nine years, with the overall loan balance being almost equally divided between standard mortgages and those with state guarantees. 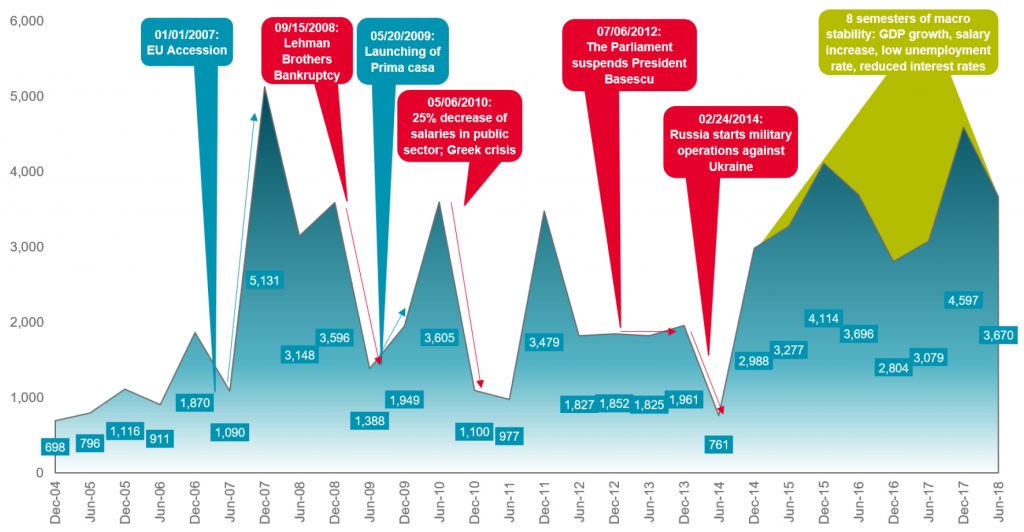 Bucharest and Ilfov have a share of 41.4% of this stock, but this growth also comes from other regions, considering that the share of the capital city is slightly down from a maximum of 43.8% reached at the end of H1 2014.

Data from the National Institute of Statistics also shows that residential prices have increased by around 25% over the last four years, both in Bucharest and at national level, above the inflation rate, but below the overall wage growth, which saw an increase of more than 50% over the same period, therefore improving the housing affordability.
On the other hand, there have lately been several voices in the public space that expressed their concerns in regards to the risks of a residential market overheating, based on the upward trend in prices and on the construction activity: even though the level of new dwellings deliveries was stable both in Bucharest and the country last year, the total area of residential buildings for which building permits were issued in Bucharest increased by 60% in 2017 compared to the previous year, which is visible in many areas of the city.

Considering that the consequences of the last financial crisis, which started ten years ago, are becoming less and less visible, we have been looking to identify the main factors that have influenced the transactional activity over the last decade by analyzing the evolution of the mortgage loan balance.

The Lehman Brothers bankruptcy on September 15, 2008, a symbol of the subprime financial crisis, had strong repercussions in the local banking system and caused a price collapse, as well as a sharp decline in the number of housing transactions and real estate lending.

Subsequently, due to the price adjustment and especially after the launch of ”Prima Casa”, on May 20, 2009, the number of transactions began to rise. This advance was nevertheless suddenly halted a year later when Romania was forced to borrow of 20 billion euros from the IMF, the EU, the World Bank and the EBRD to stabilize the exchange rates and adjust the budget deficit, while reducing the public sector salaries by 25%, a hard austerity measure that left deep marks on the local market.

The second semester of 2011 was a positive one, with an advance of 3.5 billion lei, followed by four semesters (2012 – 2013), in which the mortgage loan increase was low, with advances below the 2 billion lei threshold. It should be noted that the political tension during that period, which culminated with the impeachment of President Traian Basescu in Parliament, followed by a dismissal referendum, had a limited impact on the mortgage lending activity. The market reacted more acutely when the local political crisis overlapped with Russia’s military intervention in Ukraine: the weakest advance of the mortgage loan balance in the last decade (761 million lei) was recorded at the end of H1 2014.

Subsequently, presidential elections took place at the end of 2014, with Klaus Iohannis winning a five-year term with the general support of the major European powerhouses and institutions. This period coincided with the end of the financial crisis and a return to a positive economic trend in general and in the residential market in particular, with the stock of mortgage loans seeing increases of between 2.8 and 4.6 billion lei in each of the following eight semesters.

What conclusions can we draw? Overall, the residential market still has enormous potential. The average mortgage debt per adult capita was of 895 euros at the end of last year, compared with 2,991 euros in Poland and 1,683 euros in Hungary, while the mortgage loans to GDP ratio was of only 7.6% (compared to 20% in Poland and 11% in Hungary), according to “Hypostat 2018, A Review of Europe’s Mortgage and Housing Markets”, thus giving banks enough space to continue the mortgage lending.

The market reacts to economic cycles, but also to external factors, so there will be ups and downs. Brexit, digital currencies or the local economy suffocation? Where will the next adjustment come from?

Vlad Saftoiu joined Cushman & Wakefield Echinox in September 2017 and he is a Junior Researcher. He studied in UK and the Netherlands, obtaining his bachelor and master’s degrees in fields such as International Relations, Security Studies and International Organizations. Vlad is a member of our Research Department and he is responsible with market and feasibility studies conducted for our clients and also with the development of market reports and with updating our databases.